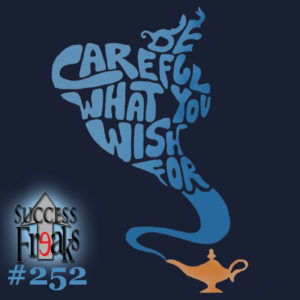 Welcome to the “I don’t think that means what you think that means” motivational show.  Mordant & McFall will tackle how they have misstated their universal goals and what they did to fix them.

Thinking about what you don’t want in life is not the way to get to your end goal.  It may be easier to think this way, but let Mordant & McFall guide you along the other path.  What do you want?  This is the golden question.  Once you start thinking along the right path you can take the advice from this show and learn how to walk through life without having to depend on the “crutch” of focusing on what you don’t want to happen.   END_OF_DOCUMENT_TOKEN_TO_BE_REPLACED

In a world where  it seems like most responses are based in fear, Mordant & McFall are discussing how to have rational love-based responses.

On this episode of Success Freaks, we jump right into “what the title of this week’s show means” and how it affects us all.  In segment two, Charles talks about the psychology of Perception.  Chatroom Query: How do you tell the difference between fear and instinct?  In the Level Up section, we learn how to deal with our fears and be patient with those who are dealing with their own fear.  In On Beyond, the discussion is about the emotion of Fear vs. respect and understanding.  Plus… there’s Werewolves.

END_OF_DOCUMENT_TOKEN_TO_BE_REPLACED

The Success Freaks received this question from Listener Nada: “Can you talk about how the Ego may or may not fuel the fear we have of how we are perceived and rejection and ways these fears hold us back from opportunities. Also, methods to put our egos in check so that we don’t get in the way of ourselves.”  Listen in as Mordant & McFall go in depth with both their answer and, of course, the humor as they edify and entertain their way into helping you be awesome!

On this episode of Success Freaks, McFall pretty much nails his Randy “Macho Man” Savage impression!  Mordant sounds silky smooth with nary a scratch in his voice.  The guys discuss thinking beyond the Herd Mentality.  When Ego meets resistance, you’re doing it right.  In the Level Up section, we learn about systematic desensitisation, EFT tapping, and “why ask why?”  Finally, in On Beyond, the guys tackle their next big challenge. END_OF_DOCUMENT_TOKEN_TO_BE_REPLACED

On this episode of Success Freaks, Mordant & McFall tell a story where words mean things!  Charles gets into a movie (without a ticket!)  The guys delve into the topic of Doubt.  In the Chatroom, Listener Mike says that we hear more of our own errors than anyone else does.  In the Level Up section, we learn to have more compassion and Mordant says something brilliant.  Finally, in On Beyond, Charles has no doubt that he spoke well on graduation survival. END_OF_DOCUMENT_TOKEN_TO_BE_REPLACED

Are you waiting for opportunity to arrive before doing your prep work?  Why bother learning a skill, memorizing a speech, setting money aside before you have something to work for?  Because, Success = Preparation + Opportunity.  How well and how quickly you move towards your desired goal is directly related to your level of preparedness when opportunities come knocking on your door.

This episode, Mordant & McFall speak frankly about why it is important to get ready before your dreams begin showing up in earnest.  If it’s something you really want to show up in your life, you should hunt it down and work on it, revel in it, master it time and again – because you love it!  And, because doing your due diligence means you’ll be more than ready to step forward and carpe that diem the moment your opportunity shows up. END_OF_DOCUMENT_TOKEN_TO_BE_REPLACED

On the Road Again!  Where are you heading?  What’s the “Big Event” you’re preparing for and how is it Leveling Up Your Life?

This Episode, Mordant & McFall are preparing for their speaking panel at this year’s New Media Expo (NMX) in Las Vegas.  Listen in while they discuss the best strategies for moving forward and how to face your fears and embrace your failures. END_OF_DOCUMENT_TOKEN_TO_BE_REPLACED

Whenever you are starting a new project, you need two things to be successful and, yup, you guessed it from the title – Blood and Guts.  Do you have the gumption, fortitude, and tenacity to push through your doubts and fears and press on to succeed at whatever goals you have envisioned for yourself?

This episode, Mordant & McFall ask the hard questions you need answers for in order to build your project correctly.  Tune in and hear their individual opinions on how important it is to have the blood and guts necessary to set off a positive revolution in your own life. END_OF_DOCUMENT_TOKEN_TO_BE_REPLACED

Are you so afraid of making waves in your own life that you hold back from answering when opportunity comes calling your name?  Have you forgotten what you learned as a child – that Scary is the New Fun!?  Mordant & McFall regale you with Success-Freaky tales from the high seas of 2015.  Explore new horizons as they share what they are going through, where these adventures will take them this year, and how they worked so hard to set up these new prospects.

This episode, delve into your own reasons behind why you might be holding adventure, opportunity, and new experiences at bay.  Have you become so comfortable with what you have that the mere thought of challenge leaves you high and dry?  It’s time to mix things up a little and venture forth and set sail on the high seas of getting the hell off the comfy couch and Boldly Go somewhere Scary.  Come on – it’ll be Fun!
END_OF_DOCUMENT_TOKEN_TO_BE_REPLACED

What is Courage?  What does it mean and what does it take to have courage?  I’ve heard it said, “Courage is a lie that old men tell to young men when they send them off to die.”  A clever maxim, yet I believe there is more to courage than that.  One of my favorite John Wayne quotes is:

“Courage is being scared to death…but saddling up anyways.”

If you believe what the late-great Duke said, Fear is an active ingredient in courage.  How can this be?  Isn’t courage the absence of fear?  Aren’t the bravest of the brave those without fear?  The correct answer here is…no.

Courage is not about feeling no fear at all—a double negative, yet true nonetheless.  You cannot have courage without fear.  Courage and bravery mean having fear while maintaining the ability to move forward in spite of your obstacles, real or imagined, and get the job done.  If you have no fear, then it doesn’t take any special fortitude.  Nothing out of the ordinary in the way of grit or guts to keep you on track for deeds of daring do.  You’re just doing your job—no problemo.  It is when you have fear and then combine it with the need to keep moving forward anyways—this is when courage comes into play.

END_OF_DOCUMENT_TOKEN_TO_BE_REPLACED

R. Mordant Mahon was interviewed at NMX by Farnoosh Brock, founder of Prolific Living for Episode #80.

“Welcome to Episode #80 of The Daily Interaction Show. In this Interactive Interview Series, I have an amazing guest with an amazing name: Mordant Mahon of Success Freaks, talking on a subject near and dear to all our hearts: dealing with fear.”

Listen to the latest show

There are perfect days, when the sun is shining, birds are singing, and babies giggle in joy at the site of you.  Then, there are those dark days When Things Don’t Go Your Way.  You know, the ones where you lose your keys, drop your phone in the toilet, and the dog uses the remote […]

Missed the past shows? Find them here.